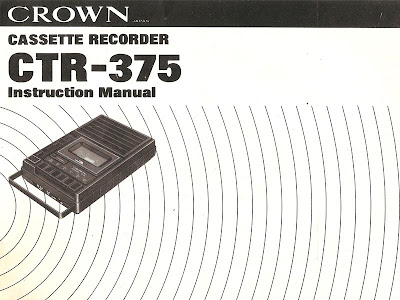 Pictured above is a marvel of 1970s technology, which Jackie bought Mike soon after they moved to Shropshire in 1977. This trusty machine gave faithful service for many years - all the Mike Gray's Jazz Incorporated, Klactoveedsedstene, Excellorators and Red Hot Pokers recordings you can enjoy in the Ancient History section of this website were made on it! - and was sorely missed when it finally expired in the mid 1990s.

Changing the subject completely, those of you with clairvoyant powers already know that the band will be playing in Wellington Square on Saturday 20th July (11am to 1pm) and at Bridgnorth Hospital Fete on Saturday 7th September (details to be confirmed*) - see you there!
To whet your long-term appetites, here are a couple of tracks recorded at The All Nations, Madeley, in September 2006 when the band consisted of Mike Gray (saxes); Keith Crane (clarinet & tenor sax); Brian Jones (keyboard); Paul Hobbs (guitar); Dave Towers (bass); Phil Asma (drums); and on Mandela, one of Mike's former pupils David Lang (previously heard by you all on the 03/05/2012 post) on alto sax.

* unless you clairvoyants out there can tell us!!
at 15:00 Labels: 3 in a bar, 3inabar, Bridgnorth hospital fete, crown cassette recorder, gigs, live events, live jazz, Shropshire, Telford, wellington square