The birth of Telford Jazz

Mike and Jim were the organisers of Telford Jazz, a jazz club based at The Pheasant, Admaston, for two years. Beginning in January 1996 just about every local band active at the time played at the club for the door money, which varied considerably depending on whether or not there was a big football match on the telly! The club's membership swiftly grew to around 200 and Mike and Jim applied for some National Lottery funding under the Arts 4 Everyone Scheme. Their bid was successful and the following year they were able to give each local band that had contributed to the growth of the club a gig at the standard Musicians' Union rate and also presented some nationally known bands, including Marilyn Middleton Pollock & Steve Mellor's Chicago Hoods, who were appearing regularly on Radio 2 in their own show Red Hot and Blue. 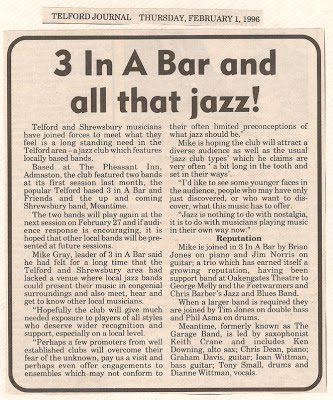 It was at this time that Mike renewed his friendship with Keith Crane, whose band Meantime shared the stage with 3 In A Bar at the club's initial sessions. Mike and Keith had first met some years earlier at a jam session in Shrewsbury. When 3 In A Bar's clarinettist Pete Fisher left to seek adventure in the Bahamas, Keith became his natural successor - the start of a long musical association and friendship which continues to this day. You can hear Keith's lovely speaking voice and Mike's horrible one in this Radio Shropshire interview broadcast on 11th January 1996, which also includes a couple of tracks by the original trio recorded in 1994.

Look out for the Telford Jazz page coming soon to this website!