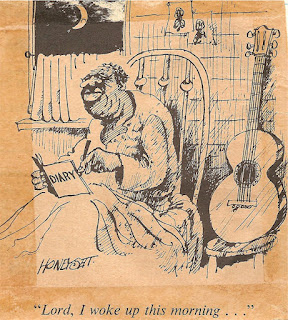 is secondary school music teachers, who have had no performing experience in either genre, telling their pupils a load of garbage about jazz and blues. The worst, and most frequent, piece of misinformation is "The blues is depressing music."

A street on the south side of Chicago, c. 1963.
Chuck: Hey, man! Muddy Waters is playin' at the club tonight!
Woody: Wow! Let's go down there an' get really depressed!


In order to stem the tide of ignorance regarding one of his favourite kinds of Afro-American music, Mike would like all children who have the misfortune to be in Year 8 or 9 to ask their music teachers, when the time comes, if there are any blues with animal impressions in them. If they are sent out, given lines, or made to listen to Lou Reed's Metal Machine Music at maximum volume, they can retaliate by directing their teacher to this distinctly undepressing piece of music.

Mike has always had a soft spot for this song ever since he first heard it on an LP that Bob Kelly lent him back in the 70s. This is because a) it is very silly, and b) it has (crap) animal impressions in it.

This blog post is also an excuse to feature what Mike considers to be one of the funniest cartoons in the known universe.
at 17:15 Labels: 3 in a bar, 3inabar, animal jazz, blues, blues is not depressing, Jazz, Jazz Band, pet hates, Shropshire, Telford, Wellington